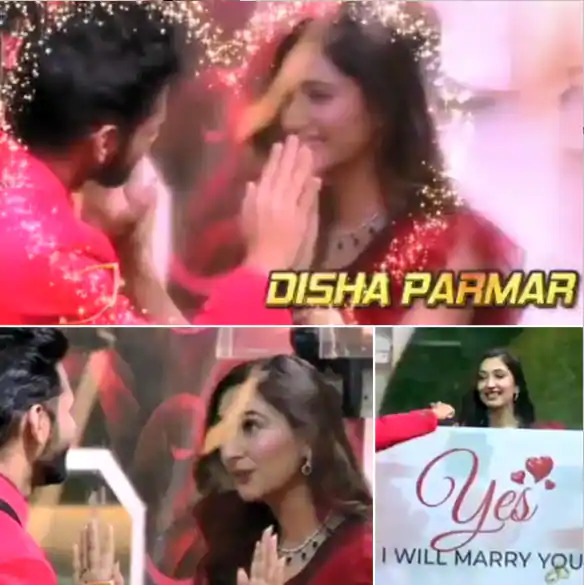 Rahul Vaidya have been eagerly waiting to meet his girlfriend Disha Parmar in BIG BOSS 14 from long time.This weekend his wish will get fulfilled in the Salman Khan’s reality show Big Boss 14.Disha will be found in BB14 and there will be romantic reunion of two love birds on the show. In the recent promo, Disha Parmar is kissing Rahul through the glass wall. They both had a sensitive reunion after 130 days.

In the latest promo, we will watch Disha accepts Rahul marriage proposal. As, Rahul is extremely happy to see Disha in Big Boss house.Disha expresses that there could not be much better day then this to be with Rahul in the house. She will be found on the show this Valentine Day. Rahul also proposes Disha with eye contact and he went down his knees, Disha accepts his proposal.

Initially, Rahul have also proposed her on birthday by expressing his love by writing on T-shirt Will you marry me Disha.Rahul have been wishing to meet Disha since long time. Finally, Big Boss 14 has granted his desire. Previously, Disha declined to be on Big Boss 14 because of Rahul’s relationship. She said that this will distract Rahul which she doesn’t want to be happened.

The singer Rahul Vaidya feels that marrying Disha will bring lots of good luck and happiness in his life. Further; he shares his weeding plans with Sonali Phogat and Eijaz Khanin Extra Masala clip of Disha Parmar in Big Boss 14.

Also Read : Aly Goni LASHES OUT at Jasmin Bhasin for ‘ignoring’ him in the Task