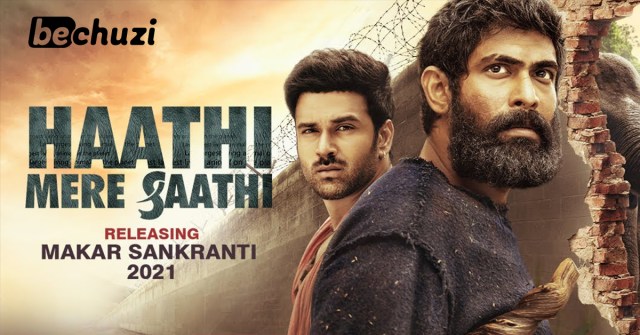 Almost a year ago, Rana Daggubati has officially announced the release date of his forthcoming movie entitled Hathi Mere Sathi in Hindi. The movie will be titled as Haathi Mere Saathi in Hindi will be also released in Aranya in Telugu and Tamil as Kaadan. The film Hathi Mere Sathi is co staring Pulkit Sharma. The film makers have announced that the trailer of the movie will be released on March 4.

Moreover, the trailer of the Kaadan and Aranya will be released on March 3, World Wildlife Day. The makers have shared new posters from the movie. Rana Daggubati will play a lead role in all three Indian languages. He also writes, Are you ready for 2021 first trilingual movie!

In the film, we can watch the conventional action fight between Men vs. Nature to Save the Elephant is back. Stay in touch on Eros now for more updates. The trailer of Kaadan and Aranya releasing on March 3.Hathi Mere Sathi movie releasing on 4th March,2021. The movie will hit the cinemas on 26th March, 2021

The film influenced by the miserable event of humans attacking elephant corridors in Assam and Kaziranga. Hathi Mere Saathi is the story of compassion and love toward the nature and wildlife. The movie produced by Eros International. The director of the movie is Prabhu Solomon. The film is also starting Zoya Hussain and Shriya Pilgaonkar. In the movie, Vishnu Vishal is playing the role of Pulkit Samrat in Tamil and Telugu genre.