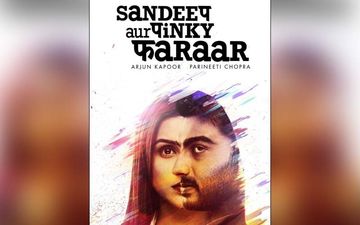 Dibakar Banerjee crime thriller Sandeep Aur Pinky Faraar is slated to release on March 19. The director of the film is set to release a new trailer tomorrow. This will give more ideas into the real and raw world of the crime thriller.

Dibakar adds, I wanted SAPF to be a movie that families, couples, gangs of friends would watch in the theatres and then go out for dinner to discussion about it! This will be one of the first movies to open theatrically I am waiting to watch if that happens with masks on.

Sandeep Aur Pinky Faraar was previously decided to release last year. Due to the pandemic strucked in India the movie could not release. Dibakar is hoping that the movie will entertain audiences as they return to normal life after spending a year in isolation.

He also mentions, we are the only movie in history to run a trailer for a year before the release of the film. There is no second trailer for those who want fresh start into the crazy adventures of Sandy and Pinky.

The movie will see Arjun plays the role of a Haryanvi policeman quirkily named Pinky. While Parineeti scripts the character of an ambitious girl from the corporate world. Sandeep lives suddenly mediate.

Dibakar is featuring Arjun Kapoor and Parineeti Chopra in an avatar. Presently, he revealed an enormous secret. Arjun character is called Pinky and Parineeti as Sandeep. Audiences will definitely see numerous and totally unexpected edge-of-the-seat twists.

The film is produced by Dibakar Banerjee Productions. The film Sandeep Aur Pinky Faraar is being released globally by Yash Raj Films.