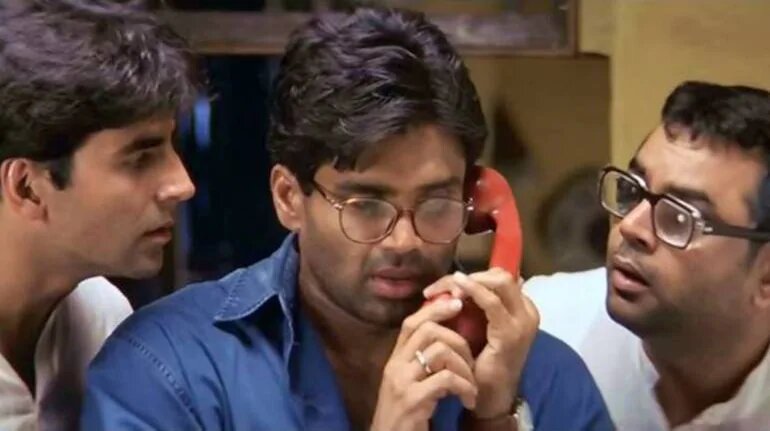 20 years of Hera Pheri: An uncertain venture that became a cult classic

Akshay Kumar, Paresh-Rawal and Suniel Shetty thriller Hera Pheri is one of the most popular films in Hindi cinema. The film is directed by Priyadarshan. Interestingly, the movie went on to become everyone’s favorite. The movie is an excellent pack of comical story line to performances and exciting songs. The film is a perfect mingle of entertainment. Today, the movie has completed 21 years. On this noteworthy occasion, Suniel has shared a message on social media.

He shared a delightful collage on Twitter presenting him and his co-stars. The picture is captioned, 21 years and counting. He wrote a sincere note that read, No wonder we underestimate how quickly time flies. It seems I blinked, and 21 years went by. What a film we made @akshaykumar@priyadarshandir @SirPareshRawal @GulshanGroverGG #Tabu. Missing #OmPuri ji very dearly today…

Akshay Kumar was quick to drop a strange comment on Suniel’s post. He becomes nostalgic, Akki wrote, Agreed! Even we did not know back then what a movie we were shooting, each scene better than the other. Specially love this one: dhoti Genius of Priyan sir and stunning dialogues by late Neeraj Vora.

Some of the sources revealed that the film will soon come up with third part. Fans are eagerly waiting for the official announcement. In one of the interview Paresh Rawal revealed and knocks over on the third part.

He said, I am surely looking forward to the third part. It must definitely happen and it will. We don’t get to see these kinds of epic roles and movies coming more often. We should keep such franchises awake. He also adds, this is the best time to do comedy and bring joy to audience.